Stay up-to-date with the hottest tickets in town news and events.

Globe-trotting troubadour Carus Thompson has toured the world alongside The John Butler Trio, The Waifs, Xavier Rudd, Jack Johnson & Pete Murray, selling over 30,000 albums along the way. He’s won his loyal fan base through 20 years of delivering passionate, energetic shows that entertain and engage, the Dwarf magazine calling him “a treasure in the Australian musical landscape”.

Thompson is touring to launch his brand new single “London Coffee”, a taste from his forthcoming 8th studio album.

“London Coffee” is a song dedicated in loving memory to Sydney singer-songwriter Mick Hart, who tragically passed away in 2020. Hart and Thompson were good friends, touring the UK and Europe a lot together, forging a path for themselves as independent, down to earth, “can I please sleep on your couch” acoustic artists. The song’s a window into that life; it’s intensity but also the connections made:

“in and out of bars, late nights and cars, friends who gave us all we own”

Hart gave Thompson his first gig in London, and the lyrics sing of a London coffee they had together one morning on tour. It’s a tribute to Hart, but also a tribute to all the Australian independent, un-backed artists who have headed off on the road to try and get their music heard.

Come down and see of this country’s most enduring and loved, independent acoustic artists, who’s taken his music to the word and won a legion of fans in the process.

“From the songwriting to the delivery and on to the political, social and personal commentary there’s a class and polish that oozes forth” Four Stars – atthebarrier.com UK

“London Coffee” is out Friday 6th August via MGM. 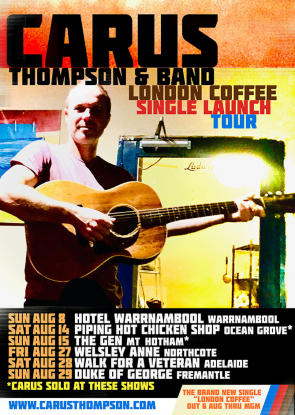 Give your next event the local edge.

We're in every Aussie town selling the hottest tickets around. Create your event now and start selling tickets today, or call our passionate professionals for some expert hand-holding.

TALK TO AN EXPERT WATCH VIDEO GET STARTED

Before you can login you'll need to request a code, we'll send that to your email address or mobile phone.

If you already have a code you can skip this step.

Once you receive the code to your email address or mobile phone you can login with it.

Login to manage your events

You've made a great decision to sell your tickets using Local Tickets!

You've come to the right place